The vitality of a city comes from its pedestrians, not its cars. Cars consume enormous amounts of space and radically change the landscape.

By JIM BEAMGUARD of The Tampa Tribune 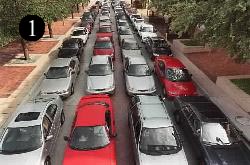 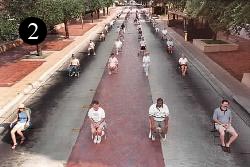 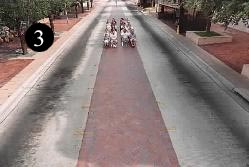 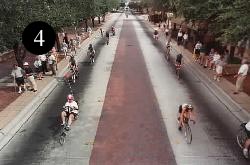 The irritation of traffic jams makes most of us enthusiastic supporters of either wider roads or fewer people, but rarely do we think about a third alternative: fewer cars.

On a quiet Sunday morning, you think to yourself that very few people are out, when what you mean is that their cars and trucks aren’t crowding the roads. There are probably more people out in their yards or on the sidewalks.

As the photographs on this page illustrate, what we call urban congestion is not too many people, but too many vehicles in too small an area. You can see about 40 cars … perhaps a few more if you have good eyes … jamming Marion Street in downtown Tampa, where their drivers parked them on a recent Sunday morning to put in pictures what is a surprisingly hard concept to explain.

Their cars filled the entire block. Then each moved his or her car to a parking lot and returned with a chair to the exact spot where a car had been parked. You can see how far apart these people are, even though their cars were jammed as tightly as possible.

An exercise in street smarts

The same 40 people who constitute a crowd in traffic create a new city scene when they get out from behind the wheel. 1. In the demonstration above, first they fill four lanes of downtown Tampa’s Marion Street in their automobiles.
2. Then each trades the driver’s seat for a chair.
3. Next they assume the pose of transit riders, clustering their seats in one bus-sized space.
4. Finally, they take their places in the urban landscape as pedestrians and cyclists.
PHIL SHEFFIELD/Tribune photos

Then 40 people rearranged themselves as though they were riding on a bus. Can you see that ridiculously small group of people sitting together? That’s what a full bus looks like without the bus.

Finally, they returned to Marion Street to pose walking and riding bicycles. Does the street look crowded? Not at all. It could easily accommodate many, many more.

The vitality of a city comes from its pedestrians, not its cars. Cars consume enormous amounts of space and radically change the landscape. The highways and high-speed feeder streets become unpleasant places to live because of the noise, dirt and danger that increase along with the traffic.

The idea for the series of photographs came from Ed Crawford, director of the Tampa-based Alliance for Modern Transit and Livable Communities. Crawford showed me pictures from a similar series that someone made years ago in a European city.

It reinforced a quality-of-life theme that he has been spreading in public meetings, at civic gatherings and wherever else he can get anyone to listen. When he put the word out that we needed volunteers, he had no trouble rounding up more than 50 people from his own organization, Tampa Bay Freewheelers, HARTline and Bay Area Commuter Services.

The people arguing loudest against a better transit system complain that Tampa is already overcrowded and should spread its growth farther afield. I don’t think it’s the people or their homes that spark this irritation. I think it’s mostly the increasing numbers of automobiles that have made the Tampa area among the most dangerous places in the country to walk or ride a bicycle.

Another argument against transit, especially rail transit, is that people don’t want to give up the freedom of their cars. I certainly don’t, and what’s more, I won’t. But I would ride a train or bus to and from work if the trip were faster and less costly than driving my car, and I think a lot of other people would too.

“”Two-thirds of the surface of Los Angeles is used by automobiles parking lots and roads,” says Crawford, who is determined that Tampa won’t follow that sprawling example without at least considering an alternative.

One a small scale, as in a suburban mall or a small town, a car is all that most people need to go wherever they please. But as a city grows and streets fill up, that freedom of mobility begins to diminish unless better ways are found to help everyone get where they want to go.

The more I picture what total reliance on the car will mean for Tampa, the more I favor a train.